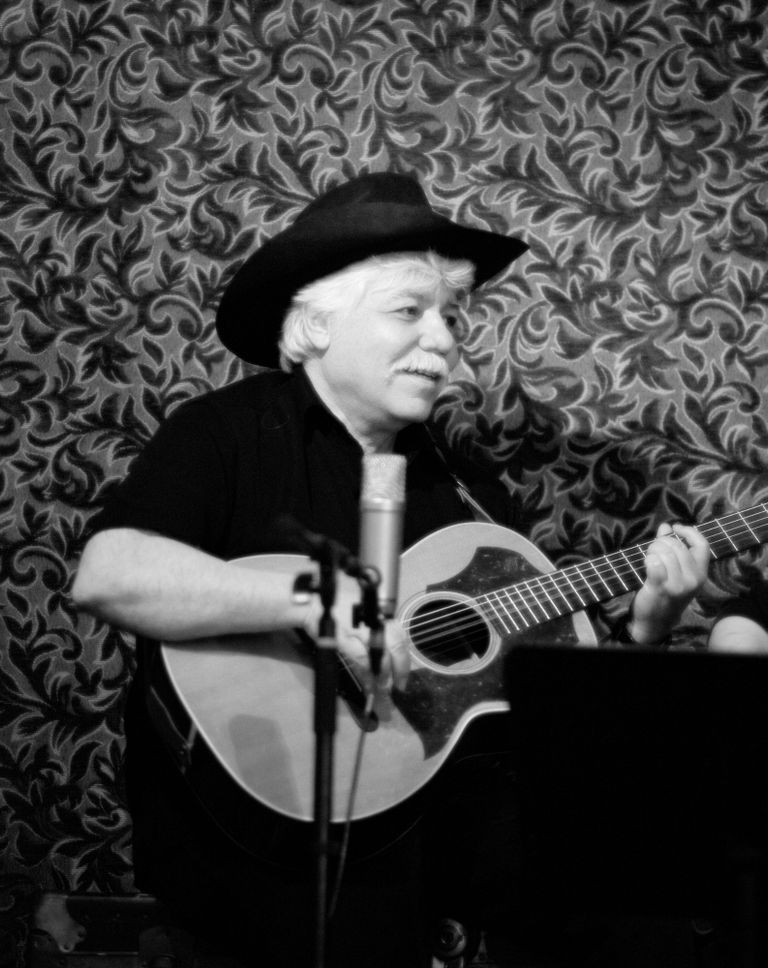 Stewart MacDougall is a Canadian singer/songwriter. He began his musical journey over fifty years ago in Fredericton, New Brunswick. He is best known for his keyboard and vocal work with Laura Vinson, k.d. lang, Ian Tyson, and Great Western Orchestra.

Steff Kayser is a Seattle-based folk artist. Steff plays and sings with precision and passion and is an  in-demand accompanist, bandmate and session player. Steff will be performing as a solo artist for this concert. 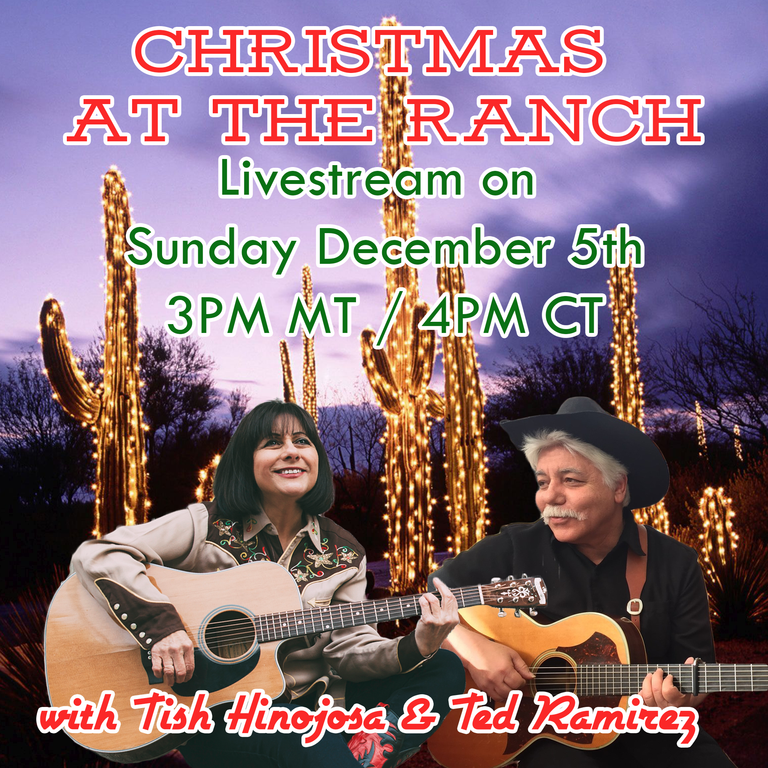 Tish and Ted are into the Christmas spirit! Join them for a mixture of songs and holiday fun! They will live stream this performance from Tish's living room in Southern AZ. They will be playing lots of Holiday songs, beautiful Mexican standards and classic American folk songs - plus their original songs!

Click the "LEARN MORE" button below, to join in the fun! Happy Holidays Everyone!

Join Ted for this upcoming
Tucson Presidio San Agustin's
"Christmas, Culture, & Music"  program.
This will be a live audience and Zoom Concert!
December 18th, 2021 at 7pm.

This year Ted welcomes back his good friends: 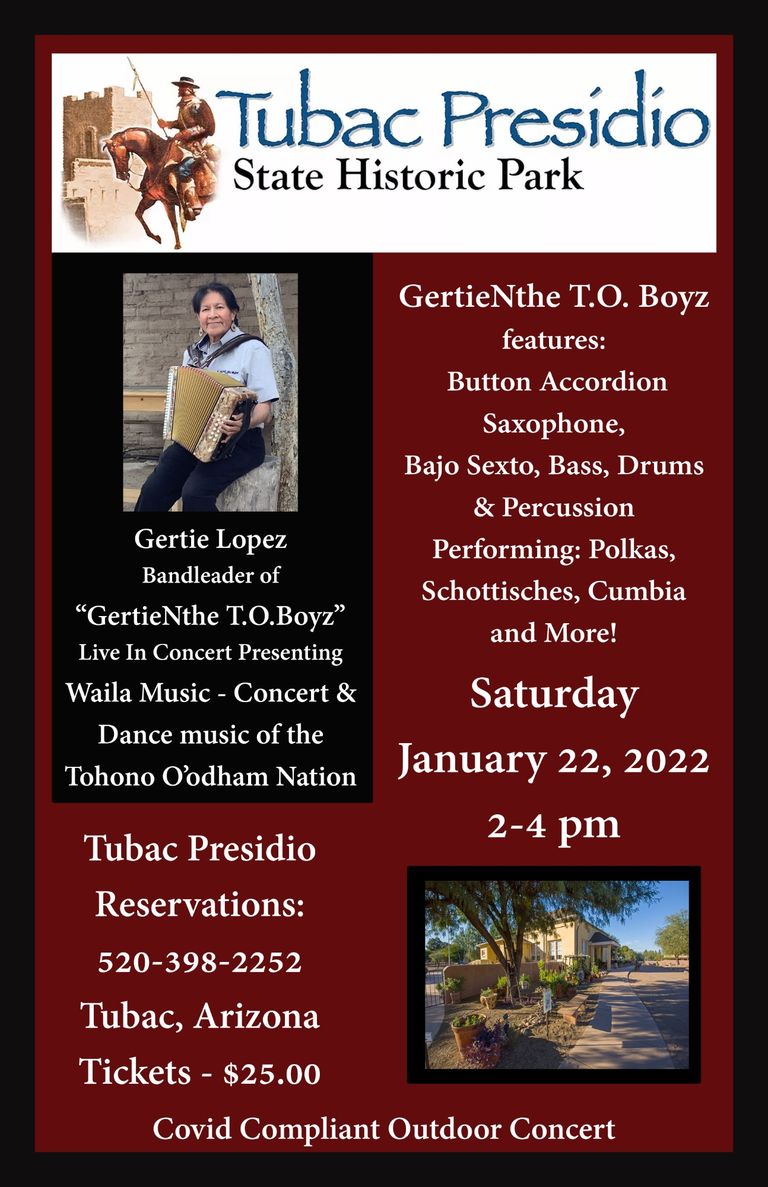 The "Gertie and the T.O. Boyz" band first began playing  "Waila" music (a dance music style of the Tohono O'odham Nation) on Tohono O'odham reservation in State of Arizona.  As word spread of their outstanding music, they expanded their performances to venues all over the U.S. and Mexico. They are now seasoned performers and bring their special music to the Tubac Presidio.

Please do not miss this special concert!

John Coinman is an award-winning singer-songwriter who grew up on the Kiowa Grasslands in Clayton, New Mexico. He has recorded five solo albums and had numerous songs in films and on television. John is the bandleader for Kevin Costner & Modern West (KCMW) and he was the Music Supervisor for the film Dances With Wolves. He has been touring with KCMW since 2006 and has recorded 5 albums of original songs with the band including the companion CD to the award winning miniseries Hatfields And McCoys. He has collaborated with many notable artists including John Densmore of The Doors, James Intveld, Michael Blake (the writer of Dances With Wolves), Amy Rigby, Tony Gilkyson (of Lone Justice and X), Teddy Morgan, and 4 time grammy winner Alfonso Rodenas. John's latest solo album Under The Sun was released in October, 2019.

Tish Hinojosa is a Mexican-American Singer Songwriter born in San Antonio Texas and living most recently in Austin, Texas. She is the youngest of 13 children born to two Mexican immigrants who, as stated in her song “West Side of Town,” “made a good life the hard way…”

Her songs blend the genres of country, folk and Hispanic music in a way that can only be described as a musical melting pot; unique and insightful.  She sings and writes in Spanish and English and has many bilingual songs, including a full album of children’s songs that has often been used by teachers as a tool for teaching the Spanish language. The Chicago Tribune put it succinctly “Simply put, Hinojosa is a first-class songwriter.”

She now splits her time between Austin, Texas and Tubac, Arizona with her husband Lynn, and loves being “Abuelita” to her 4 grandchildren ranging from 13 years to 16 months (with number 5 on the way).

Currently Tish is ramping up her solo career and tour dates after an 18-month hiatus due to COVID. She also continues to play and write with her Latina music trio The Texicana Mamas, (launched in 2018) who released their first album in 2020, amid the pandemic. Coincidentally, their initial gig was played at the Bluebird Café; they have since played at The Kennedy Center in Washington, DC in early 2020 (just pre-pandemic) and will grace the stage at the Grand Ole Opry in Nashville in September 2021. They are slated to headline at the Kerrville Folk Festival in October of this year (2021). This group will tour together as soon as conditions allow.